Developers are always looking for new and innovative ways to streamline workflow. That's why we are excited to introduce you to Rollstack, a revolutionary new tool that makes app development easier than ever before! With Rollstack, you don't need any coding experience to get started- simply create an account and start building your dream app as soon as possible!

Rollstack is a development tool created especially by developers for developers. It's a fantastic front-end development platform that compiles React web apps for you. They're presently concentrating on gaining users for the beta version, and they aim to release the software in the near future. Essentially, because they cater to developers, they target a different market than most internet tools do. And that has always been their primary goal from the beginning.

That is, we'd say we can keep a particular perspective on Rollstack, which entails being able to go down to the code level and actually coding on par with the greatest open source libraries, JavaScript libraries, and frameworks.

You may take charge of all elements of dynamic web apps developed visually directly in the canvas and see exactly what you're creating, just as your users will. Users will also be able to take advantage of developer tool integrations, eliminating the need for any additional SDKs or versions. Rollstack will link together the most popular services so you don't have to. Last but not least, you own the application code! Your application's source code becomes a clean, production-ready codebase that utilizes the most up-to-date open source libraries automatically. The source code may also be removed or downloaded at any time.

So Rollstack, in a nutshell, is a developer tool that aims to make front-end development easier by bringing together two things. The first is the power of visual design. Then there's the second part: the ability to code and modify code.

Rollstack is the brainchild of three engineers who worked hard to help companies like Pinterest, Groupon, Tesla, and ifI. They created Rollstack because they noticed that front-end development is really inefficient in terms of how it's done across organizations. They also thought that there is a chance to make a more user-friendly and simplified for individuals who are developing the front-end work.

For the creators, their objective is for back-end developers, machine learning engineers, QA professionals, and anybody who isn't a front-end specialist to become full-stack and be able to do front-end work. That is essentially their company objective. This is a crucial distinction, which most developers would undoubtedly agree with: non-specialized web designers have a hard time comprehending front-end ideas. As they said, it's a left-brain/right-brain conundrum when it comes to considering where, when, and how. Regarding innovation, the designers have been more concerned with algorithms than ideas or theory. Non-front-end developers find it difficult to understand styling libraries like books and estate management systems.

The main theme that the creators primarily communicate with a lot of the NoCode solutions is, overall, the developer scarcity, just in terms of kind. They feel that developers, in general, are more difficult to come by and they want to make it so that their product is much more accessible to a wider audience.

The three founders work remotely now, though they are all based in Paris. However, two of them plan to relocate to New York soon.

One of the problems that investors and builders face is that some tools are actually created in another web tool, so you can't have the source or control it because it's embedded within another system. This sets Rollstack apart from other NoCode solutions - you may own the code! You can modify it and improve it however you want, to make the app perfect for your needs.

Developers will be excited to use a tool like Rollstack. Because while they do the majority of the backend work, with the addition of your tool, a real back-end developer, can start being a full-stack developer much faster than what they can accomplish in today's world. Especially at the moment when there are more back-end developers than front-end developers.

Lately, they launched an alpha version, but it's not accessible right now directly from their website since the objective was to obtain the first customer feedback and an iteration on the first users, but they released it after only six weeks of effort and over a 20-day period, during which we've seen it being utilized by more than hundreds of 45 people.

They are now in the process of developing the tool's beta version.

They are currently gathering testers for the beta version, and they plan to release it soon. So, right now, they're mostly concentrating on recruiting as many potential beta users as possible so that they can release the beta version.

Who can test out Rollstack?

On the startup side, they are targeting those with less than 10 developers. which surprisingly makes up for more than 30% of the market startups at the moment. They also prioritize B2B FinTechs, HR Tech, data science, and blockchain infrastructures. They are also interested to work with agencies and development studios as well. In terms of pricing, they are eyeing to offer a very low price for agencies and studios, with an unlimited number of apps to create and own their code.

If you're looking for a faster, easier way to develop your next app, Rollstack is the perfect solution. Give it a try today and see how simple and intuitive app development can be! Your developers will thank you for making their lives easier!

What are you waiting for? Get started with Rollstack today!

Don’t forget to subscribe to our newsletter to get the latest scoop on the NoCode world!

The rich text element allows you to create and format headings, paragraphs, blockquotes, images, and video all in one place instead of having to add and format them individually. Just double-click and easily create content.

How to customize formatting for each rich text

Headings, paragraphs, blockquotes, figures, images, and figure captions can all be styled after a class is added to the rich text element using the "When inside of" nested selector system.

Join Our Newsletter and Get the Latest
Posts to Your Inbox 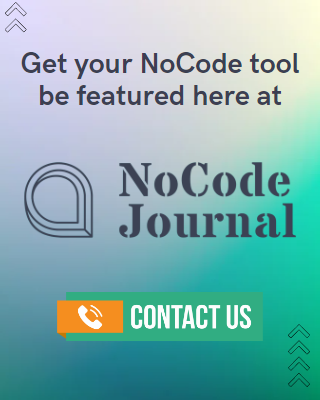 NoCode Communities You Need To Know

We are always putting out the latest NoCode and LowCode content and Newsletters out.
NoCode Tool Summary

Thank you! Your submission has been received!
Oops! Something went wrong while submitting the form.
©NoCodeJournal - All Rights Reserved 2019 - 2022
https://journalgrpllc.com/ - A Journal Group Company